All Collections
Figures, Tables, Equations and Other Text Elements
Everything Equations
Equations in SciFlow

Generating and placing equations within your document.

Written by Arthur Höring
Updated over a week ago

In order to add an equation into the editor, place your cursor where you want the equation to appear. Then click the equations button in the format bar at the top. This will cause the equation editor to fade in.

This interface asks you to enter LaTeX code, that will directly translate into a equation under equation preview. The PLACE EQUATION button transfers the code into the editor as the equation that was displayed in the preview. 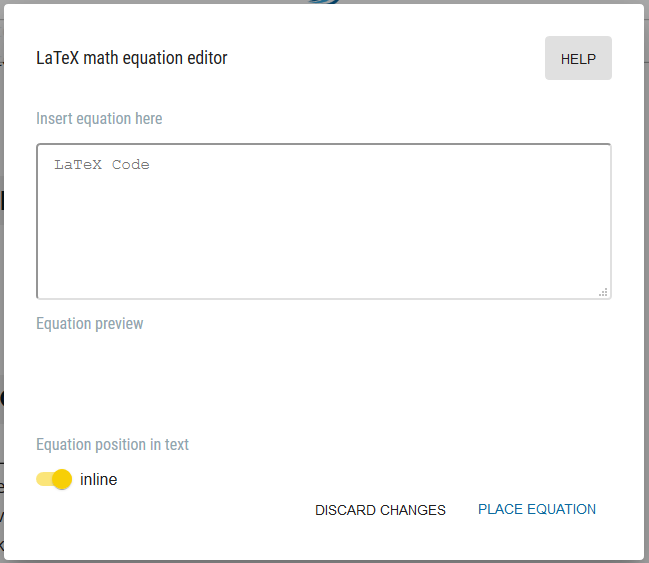 Experienced LaTeX users can write their code directly into the text box, whereas other users can resort to the support shown below.

Non-LaTex users are advised to click the questionmark button in the top right corner of the SciFlow equation editor, where they will find a link to the CodeCogs equation editor.
This editor provides an interface designed to enable you to create custom equations, which convert into LaTeX code.

The provided code is then again viable for usage in the SciFlow equation editor. That way nobody has to worry about a woul-be disadvantage regarding the LaTeX language.

While your equations by default arrange themselves within the running text, you have the option to indent their placement. This allows for a more prominent and emphasized positioning of your equation. Indented formulas also appear in the Document Outline, making them avalaible for cross-referencing.

To change the alignment of an equation, click on it in the running text, deactivate the inline modulator and place it again.

Did this answer your question?